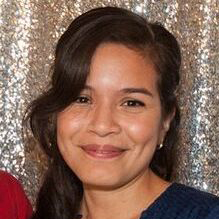 Jessica Agudelo is a Supervising Librarian for Children's Services at the New York Public Library. She was the chair for NYPL’s debut edition of the Mejores libros para pequeños list in 2019. Jessica was selected as a Spectrum Scholar in 2014, and is currently the 2020 Emerging Leader for ALSC, and chair for the 2021 Pura Belpré Award selection committee. She regularly contributes reviews of Spanish and English to Booklist, and is a proud member of the Association of Library Services to Children and REFORMA. Jessica is Colombian-American and was born and raised in Queens, NY.

Just before the holiday season last year, the New York Public Library debuted its list of Los mejores libros para pequeños, a selection of twenty notable Spanish language books published for children in 2019. The group of bilingual librarians and library staff that selected the titles, much like the books themselves, represented countries across Latin America, and reflected the city of diverse library users we serve.

The Mejores libros para pequeños list was born out of a conversation between Adriana Blancarte-Hayward, the Outreach Services Manager for the Library and current President for the REFORMA Northeast Chapter, and myself. Adriana had long envisioned a Spanish language counterpart to the Library’s annual Best Books for Kids list (which has existed for over a hundred years). My own experience serving on a selection committee for the Library gave us the framework needed to push the project forward. From the start, our goal was not only to share and promote marvelous books published in Spanish, but to acknowledge the significant and expanding Spanish speaking population in New York City, and strengthen its connection to the Library.

After developing the criteria for the book selections, choosing the committee members, and requesting eligible titles from publishers, we were ready to read! Eight months and over 200 books later, we narrowed the contenders down to the twenty best of the year. The resulting list features a range of books spanning a variety of genres, some depicting the contemporary experiences of Latinos, such as “La princesa Inca'' by Ana Alonso, a middle grade book about a Peruvian family living in Spain and their experience with injustice, and “La luna mango” by Diane de Anda, a timely depiction of the anguish resulting from deportation, and the resilience it takes to carry on. Also included are titles featuring more light-hearted fare, that are sure to induce endless giggles and encourage time spent together reading, like Jorge and Megan Lacera’s relatable “¡Los Zombis no comen verduras!, and the translated edition of Timothy Knapman’s “Luisa siempre va con prisa.”

The Mejores libros list is in essence a celebration of our Spanish speaking community, so it was a thrill to include a number of excellent titles published this year about some inspiring Latino heroes.

The Mejores libros list is in essence a celebration of our Spanish speaking community, so it was a thrill to include a number of excellent titles published this year about some inspiring Latino heroes. Such as Cristy Hale’s bilingual title, “Todos iguales: un corrido de Lemon Grove,” about the fight for equality spearheaded by a Mexican community in 1930s California; and “Mario y el agujero en el cielo: Cómo un químico salvó nuestro planeta” by Elizabeth Rusch, which celebrates the Nobel prize-winning Mexican chemist and his world-changing discovery. We were especially delighted that a figure who inspired this very list was also represented in Anika-Aldamuy Denise’s “Sembrando historias: Pura Belpré: bibliotecaria y narradora de cuentos,” a picture book biography of the first Puerto Rican librarian at the New York Public Library. As a tribute to Belpré’s enduring influence, the use of the word “pequeños” for our list’s name is a reference to the annotated booklets of Spanish and bilingual titles she produced throughout her career.

Sharing this project with the public has been deeply gratifying, made all the more exciting by the positive reception this list has received from library patrons and various media outlets. Among many “best of” lists that abound at the end of the year, this one is undoubtedly special. What I’ll remember most about working on this project, aside from the delight of reading many heartfelt, inspiring, funny, and all-around marvelous books, was sitting in a room with my Latino colleagues. Our different nationalities--Colombia, Dominican Republic, Honduras, Mexico, Paraguay, Peru--and varying perspectives, strengthened our deliberations and bonds. Aside from the books under consideration, discussions about music and food were inevitable, as were the differing meanings of certain words (is a straw a pitillo or a sorbeto?) across countries. The camaraderie and the shared belief among us about what this list will mean in the reading lives of our library patrons is what made this the labor of love that it is. I cannot wait to see what titles will make the 2020 list!

To see the full list of titles on the Mejores libros para pequeños 2019 visit nypl.org.