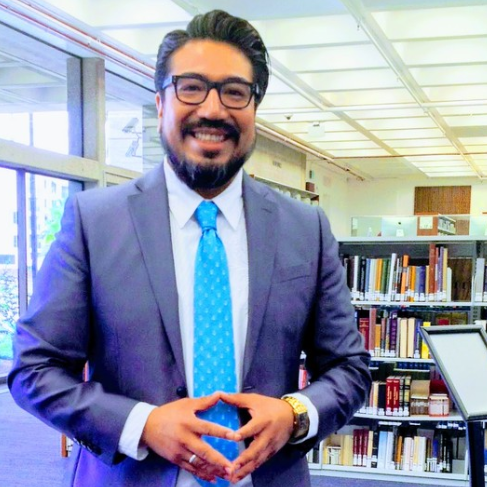 Juan Guillermo Garcia, Librarian/ Literacy, ESL and Immigration Service. Guillermo was born and raised in Mexico City. He is a recently graduated student with a Masters’ Degree in Library Science from the University of North Texas. He got his bachelor’s degree in Library Science from Universidad Nacional Autónoma de México (UNAM), in Mexico City, Mexico. He moved to the United States in 2005. Guillermo currently oversees the literacy, ESL and Immigrant Services office at the Glendale Downtown Central Library. He is also the Spanish Outreach contact at the library.

During the pandemic, the Library Arts and Culture Department is offering services to all our communities in Glendale. We have a great variety of electronic resources and we are creating a good number of videos for children, teenagers, and adults, the videos include virtual programs like author talks, story times, book reviews, and craft video tutorials. Our patrons can also checkout physical items through our curbside pick-up service.

Our library communities are very diverse and we offer multilingual programs, especially in Armenian and Spanish. We also have a good selection of books in our Global Languages collection, which includes the main languages of Glendale: Armenian, Farsi, Korean, Russian, Spanish, Tagalog, and Vietnamese.

Glendale is a diverse city, so the we strive to be inclusive and offer equal access to all our communities as much as possible, and that’s why Glendale Library, Arts & Culture’s (GLAC) and the Southern California Library Cooperative’s created the Be The Change series, which is focused on: Inclusion – Diversity – Equity – Antiracism. Be The Change events will build collective understanding of systemic racism, elevate the voices and stories of Black, Indigenous and People of Color (BIPOC), and inspire our community to be the change. 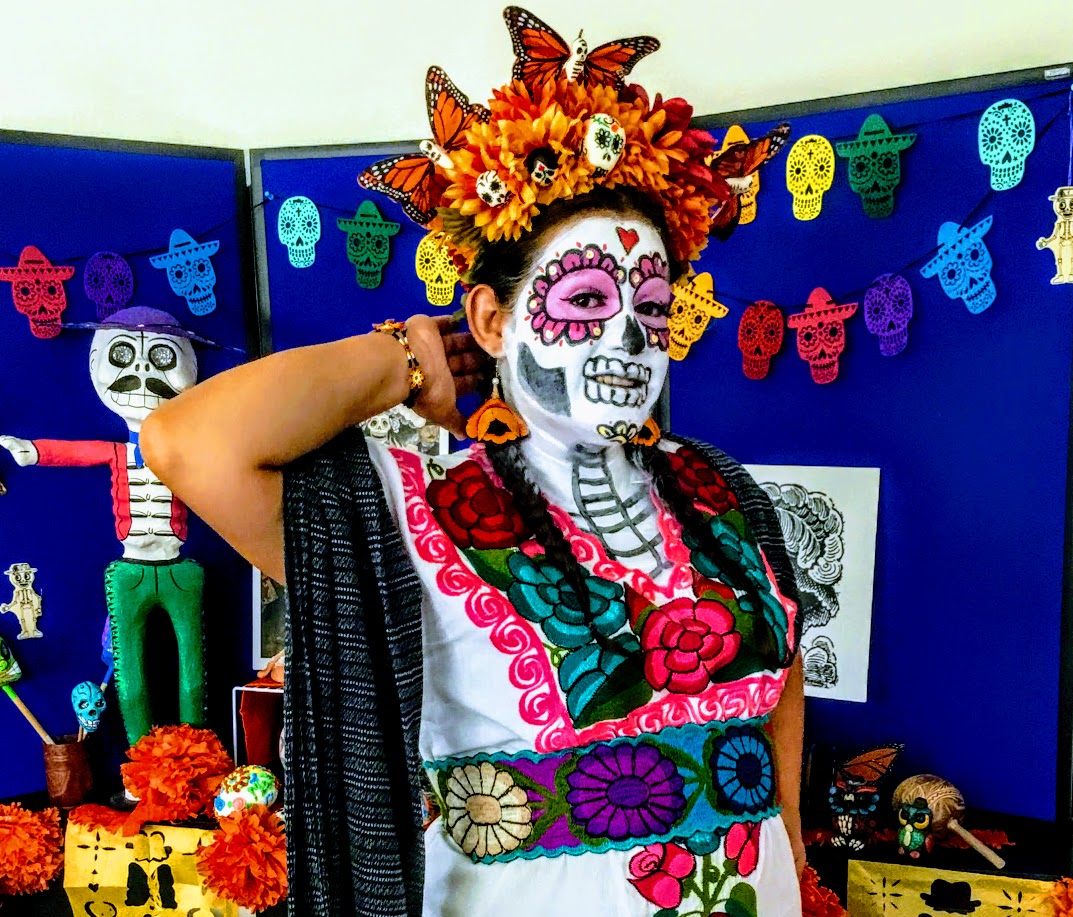 The Be the Change series takes place in conjunction with such commemorations as Hispanic/Latinx Heritage Month, Native American Heritage Month, Black History Month, Armenian Genocide Remembrance, Asian American and Pacific Islander Heritage Month, and LGBTQ+ Pride. The series will also examine the one-year anniversary of the 2020 racial justice protests and 100-year anniversary of the Tulsa Race Massacre. The series will include virtual lectures, exhibits, and online programming from authors, curators, and historians.


I believe it is very important to offer multilingual programs at the library. We can celebrate our communities, and foster diversity and inclusion, even during these uncertain times.

We kicked off the celebration of diversity with the Hispanic/Latinx Heritage Month & Día de Los Muertos virtual programs from September 15 to November 2. We have prepared multiple virtual programs including podcasts, author talks, Spanish book reviews, interviews to staff and community members, Spanish story time, book talks, and other virtual programming for the little ones.

Here are some of the highlights from the Hispanic/Latinx Heritage Month & Día de Los Muertos celebration:

GLAC in conjunction with L.A. Meekly created the podcast Stolen Homes: Displaced Los Angeles. This podcast is a dive into the displacement of the Hispanic/Latinx and other communities in Los Angeles with host Greg Gonzalez from L.A. Meekly. The combination of Greg’s narration with the vintage images of Los Angeles from Los Angeles Public Library's Digital Photo Collection and UCLA IMLab Media Archive creates a very unique visual experience.

On September 24, 2020 we had a live author talk event, in which author and journalist Eric Nusbaum discussed his new book, Stealing Home: Los Angeles, the Dodgers, and the Lives Caught in Between, with Los Angeles Times columnist and author Gustavo Arellano. This is the story of how the entire population of the Chavez Ravine community was removed from the land where the Dodger’s Stadium was constructed.

Every Tuesday from September 15 – October 27 we posted a new Spanish language book review by bilingual librarian Juan Guillermo Garcia. Titles include: “El Túnel” by Ernesto Sábato "¡Ya Supéralo!" by César Lozano, "Véndele a la Mente no a la Gente" by Jürgen Klaric, Hija de la Fortuna" by Isabel Allende, "Los Cuatro Acuerdos" by Don Miguel Ruíz, "Aura" by Carlos Fuentes, and "La Sombra del Viento" by Carlos Ruiz Zafón. The selection of these books include both fiction and non-fiction books. These are titles that grabbed the attention of Spanish book lovers and sparked curiosity of new readers. Posting these book reviews on different social media outlets helped reach current and potential readers that had not visited the library in person before.

We also created a series of children’s virtual programming like story times in English and Spanish, by librarians Jeannette Garcia, Meghan Day, Xóchitl Rocha and Nicole Ramírez, book talks, tutorials on how to do your own sugar skull face painting and how to make Calaveras de migajón. These programs are responding to the need of Spanish programs for both Spanish speakers and families with children in the Spanish Dual Language Immersion Program in Glendale.

Every Monday from Monday, October 5 – November 2 we posted a new interview with a library staff or community member. We asked them the following questions: 1. How do you identify yourself? (Hispanic, Latinx, etc) ¿Tú, como te identificas? (Latina, Hispana, etc.) 2. What does it mean for you to be a (Hispanic, Latinx, etc) in Glendale? ¿Para ti qué significa ser (Latina, Hispana, etc.) en Glendale? 3. What does the Day of The Dead celebration mean to you? ¿Para ti que significa la celebración del Día de Muertos? 4. How do you Celebrate Day of the Dead? ¿Cómo celebras el Día de Muertos? We interviewed both Spanish speakers and English speakers. The first question is very interesting because it reveals that people from Latin American countries are very diverse, and although we share cultural similarities, we also have cultural differences, and it is important to acknowledge and recognize those differences to make these communities feel integrated and have a sense of belonging in Glendale and the United States. Many people do, but not everyone accepts the term Latinx, Latino or Hispanic, and many people like to be called by their nationality, e.g., Mexican, Salvadorian, Guatemalan, Cuban, etc.

On Saturday, October 24 2020, GLAC librarians, Isis Santos and Juan Guillermo Garcia, hosted a live Day of the Dead arts & craft workshop called Calaveras y Flores de Papel. Our library patrons picked up “grab and go” kits though our curbside pick-up service, including: colored pencils, a coloring sheet for kids, a coloring sheet for adults, a template for a paper marigold flower, and a template for papel picado. The event started with a quick overview on the meaning of Day of the Dead and the symbolism behind the Día de Los Muertos Ofrenda, followed by the craft. We received positive feedback from patrons who miss attending our craft and makerspace programs at the library. It was a very unique experience for me, and we learned that having patrons pick up “grab and go” kits, along with hosting a live craft tutorial, and sharing a general overview of different cultural values from different cultures, is a good combination for a successful library program, and we will replicate this formula on other upcoming programs.

All these virtual programs can be found at eglendalelac.org/hispaniclatinx.

I believe it is very important to offer multilingual programs at the library. We can celebrate our communities, and foster diversity and inclusion, even during these uncertain times.
Post a Comment