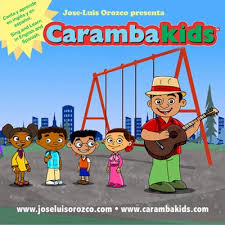 Orozco’s talent for bringing Latin American songs and rhymes to today’s children is well established through his extensive line of music recordings. His Spanish CDs are used in numerous educational programs. So why another CD? Caramba Kids is the artist’s new line of educational materials developed for English- and Spanish-speaking children. Whereas many of Orozco’s other recordings only include the Spanish version of a song, Caramba Kids includes both the Spanish and English versions of songs teaching colors, the alphabet, counting, and more, allowing children to learn languages together. Lyrics, educational activities (aligned to common core standards), and games to accompany the songs are available on the Caramba Kids website: http://www.carambakids.com/activities.html. In true Orozco style, the songs are peppy and upbeat with accompaniment by children. The only drawback to the collection is the tracking of the songs. All of the Spanish songs are listed together and then all the English songs. For programming purposes, it would be much easier to have the Spanish and English versions of the same song follow each other. Nonetheless, the collection is still worthy for any library collection. Recommended.