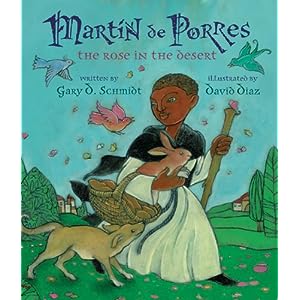 Born in 1579 as the son of a Spanish nobleman and freed black slave, Martín de Porres grew up among the poor and the rats in the barrios of Lima, Peru. While most biracial or black children would have spent their entire lives starving in the lowest rungs of society, Martín and his sister were eventually collected by their wealthy father and brought to Ecuador. Later, the boy was apprenticed to a surgeon and began working at the Dominican monastery in Lima. Soon everyone poor and rich began lauding Martín’s healing powers. As time passed, whispers of miracles, angels, and blessings surrounded his work, which was canonized long after his death when he was named the first black saint in the Americas. While Martín is a subject most children have never encountered, Schmidt’s vivid introduction is highly accessible and perfectly accompanied by Diaz’s exquisite illustrates imbued with layers of rich color and meaning. With its empowering depiction of a scorned biracial character leaping to the highest rungs of society, this picture book biography is sure to spark discussion among elementary students. Recommended.