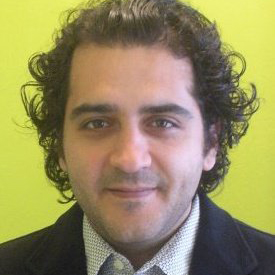 Yago S. Cura is a Bilingual Outreach Librarian at the Los Angeles Public Library. He is a former N.Y.C. Teaching Fellow and A.L.A. Spectrum Scholar who also happens to publish the poetry, fiction, and prose of authors from las Américas in Hinchas de Poesía with Jim Heavily and Jennifer Therieau. 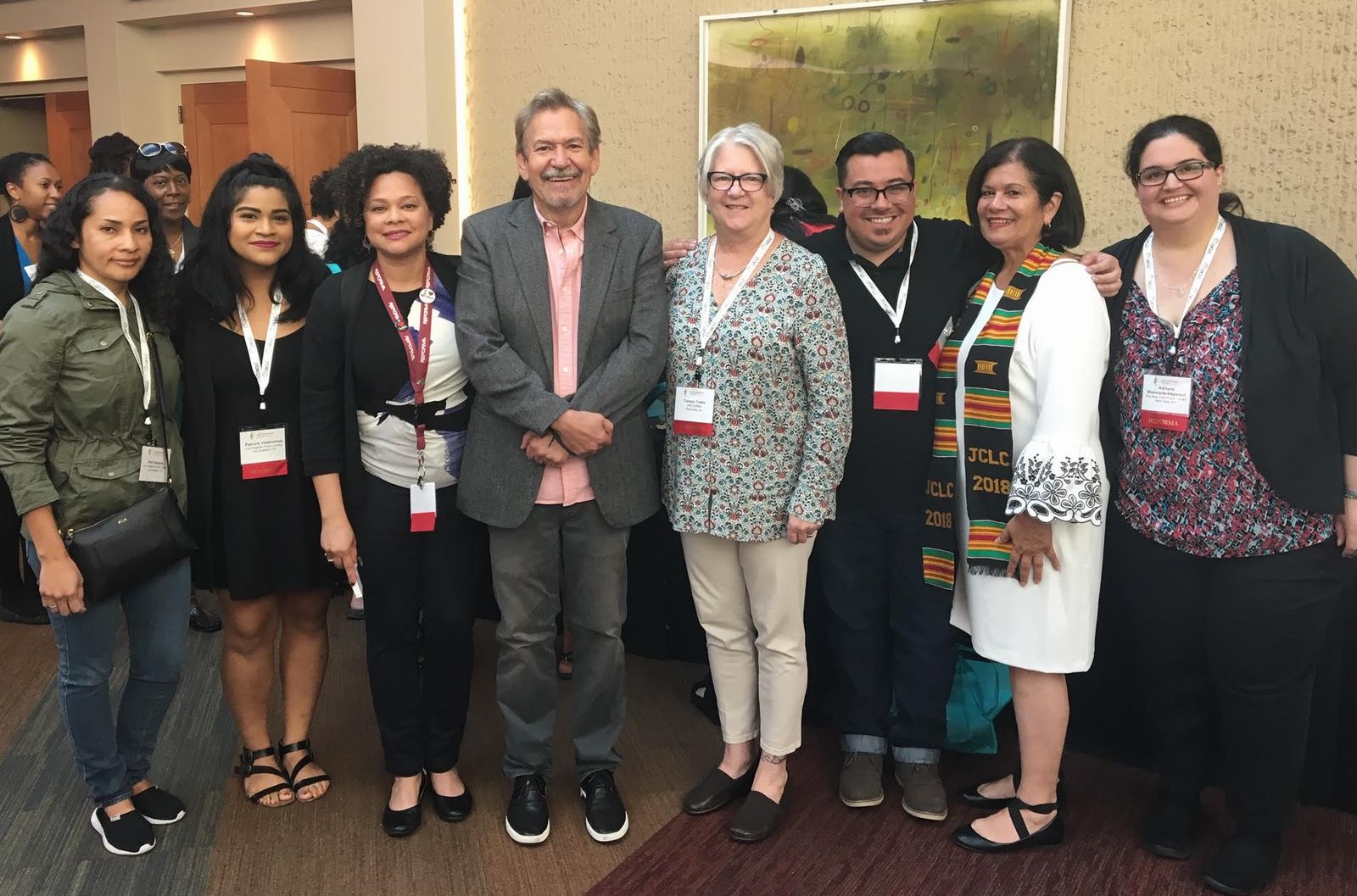 
Benjamin Alire Sáenz is a celebrated American poet and novelist. He has written for children, teens, and adults. His accolades include the 1992 American Book Award for Calendar of Dust, the 2013 PEN/Faulkner Award for Fiction for Everything Begins and Ends at the Kentucky Club, and the 2013 Pura Belpré Award for Aristotle and Dante Discover the Secrets of the Universe which this interview discusses.

Cura: How did you “raise” [as characters] Aristotle and Dante to be such great young men? What did you do to raise them?

Alire Sáenz: I think... it’s... it’s... my characters are much more virtuous than I am... they’re just two kids that... before they get screwed up, they have enough self in them to reflect and to listen to people, listen to the right people. You know, Ari is a much better person than he gives himself credit for and Dante, oh, we don’t see Dante’s faults because we only see him through Ari’s eyes, so we think Dante is beautiful because Ari thinks he’s beautiful, and we see him through his eyes, so Ari... they both are, they’re good young men, and they’re lucky because they’ve been raised by good families and they are allowed to, and they are really loved, their parents love them and they’re decent people and they raised decent sons.

Cura: And they make mistakes [Dante and Ari’s parents] and they address those mistakes and, you know the thing that really surprised me, I love how at the end Ari’s father says it’s okay, “I've noticed these things, let’s talk.”

Alire Sáenz: Well, I think a graphic novel could fill in what's not there.

Alire Sáenz: I think that what is there as a novel is, should be there. No more, no less. But, I think if you can do a graphic novel, and then you can imagine, you can write things that aren't there, and you can write up a lot of bus scenes, for instance, what they talk about, who they see on the bus, because we know they went on the bus.

Alire Sáenz: We can have other conversations that they did not have in the book that you can make up... You could have lots of scenes that you can add to that and make it into a kind of graphic novel which might be interesting. And you know... When Dante gets beat up, that's off-screen...

Cura: Gloria Anzaldúa, who I'm so happy people are reading a lot more now, says that Chicano Spanish is a living language, and that it's a language for people who are neither Spanish nor live in a country in which Spanish is the first language. My question is, could you talk a little bit about how you decided to use what language when you write? Maybe it's a hackneyed kind of question, but there's so much, it's so rich in language. 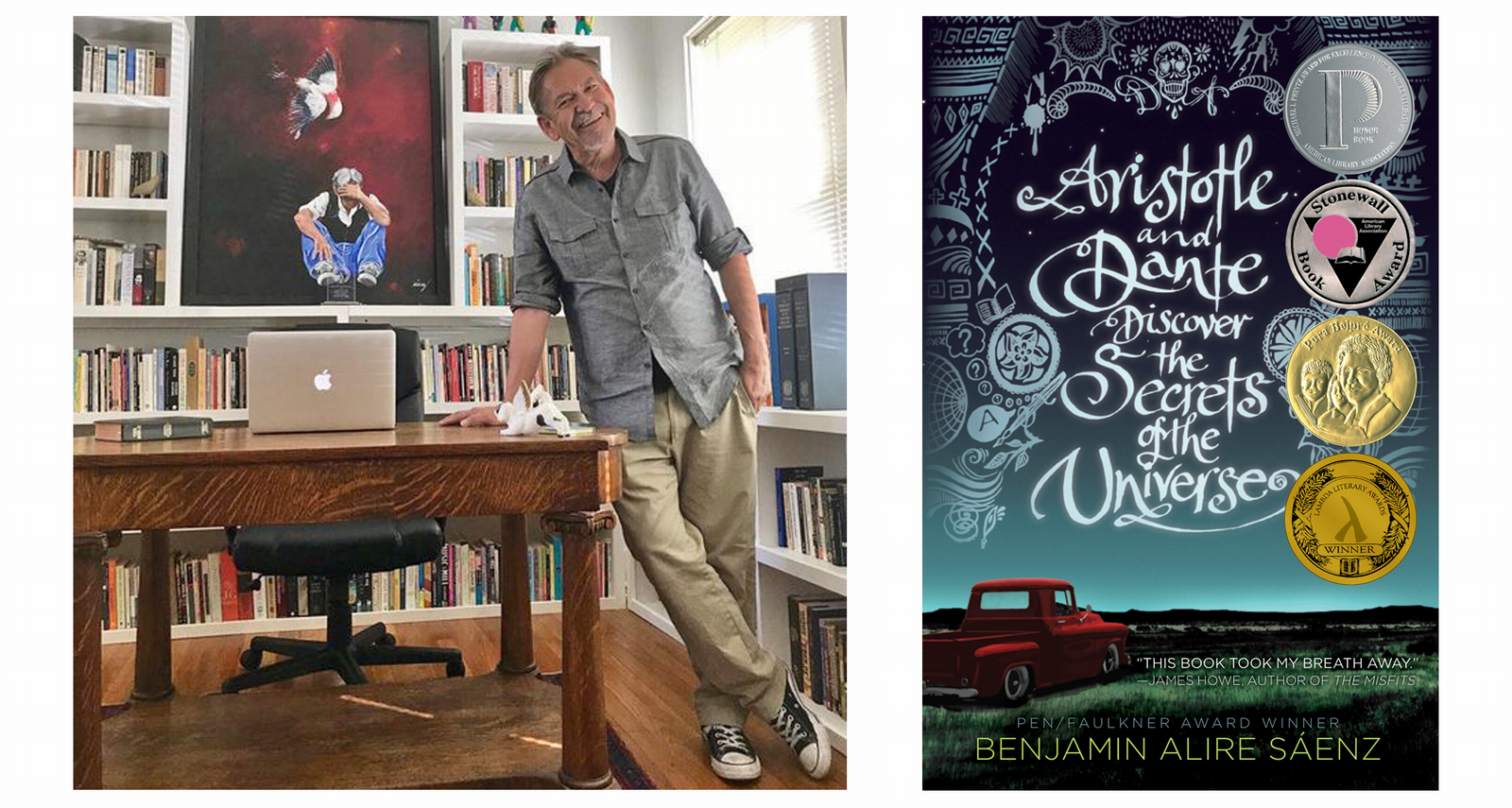 Alire Sáenz: Their circumstances. But also, as a writer, even if my language is a little bit, you know, I could bring my language abilities in Spanish pretty neck-and-neck with my English ones, but... This is, in America, they published your books in English.

Alire Sáenz: And if I write in Spanish, why would anybody in Mexico want to publish someone that's not from their country? They barely can publish their own writers. Why would they publish me if I'm writing in Spanish? It's about the market, as well. And that kind of decided for me.

Alire Sáenz: But Spanish, it will always be, I always, I use Spanish in my poetry. I use, I always use Spanish. It's like my Latin. It's my holy language.

Alire Sáenz: And I don't translate anything when I write in Spanish. If I use it in dialogue then you still understand it because if someone asks a question in Spanish then they answer it in English. You'll get it.

Alire Sáenz: Some people did complain and said to me, "I don't like it, there's so much Spanish." And I said, "Well, there's nothing, you haven't missed anything."

Alire Sáenz: You know? Except for-

Cura: If you read carefully-

Alire Sáenz: Except for, you know that people speak Spanish and you need to know that. Well, maybe, and maybe if they shouldn't do all that, well, that's too bad because people don't need your permission to speak in any language in this country. And people speak all kinds of languages. When they first came here, they spoke Yiddish, the Jewish, they spoke Yiddish. Some people still do. And Italian and all of them, you know? It adds to the richness and the texture of this country and...

Cura: What does that mean for politics of language in the U.S.? If we're leading the charge of hybridization?

Alire Sáenz: Well we don't call it that. We just call it... Impurity. We were impure, we were products of the... [La Malinche] was a traitor. She was a translator. She betrayed her own people and she was his mistress and we are the children of the marriage of the conqueror and the conquered. And so, and that means that we are impure and so we come from... even a rape, if you will.

Alire Sáenz: We are children of that and therefore we are, it makes no sense for us to speak of any kind of purity on any level. Either genetically or culturally the indigenous meets the European and creates something new altogether that has elements of both. And that's the way it is when two cultures clashing may... They change each other. We changed Spanish here. In the new world, we speak differently than in Spain.

This interview has recorded on February 20, 2019 during the second annual REFORMA Los Angeles Spanish Language Book Fair. It has been edited for length and clarity.