Nicolás Cabrera, a librarian who works at the Denver Public Library with the diverse communities who call the West Colfax neighborhood home, dabbles in creative writing, photography, and family history research in his free time.

What began as verses jotted down in notebooks at cafés, class assignments, and family stories became my first bilingual poetry collection, Ecos Neomexicanos: Poesía de la Tierra del Encanto, and some incredible experiences sharing my verses with others in Colorado, New Mexico, New York, and beyond. It was published by Judith Literary Press, a small, independent publisher in Pittsburgh. My first published poem, La yerbabuena, appeared in The Acentos Review in 2014 and went on to win first place in the poetry category in the 2015 National Federation of Press Women Communications Contest. The poem recalls a beloved childhood memory about my great-aunt Mary, great-grandmother Juliana, and a mint plant (hierbabuena) growing in their yard. Both women have since died and their house is gone, but our family still grows mint from that plant. A small plaque marks next to where their house stood. Earlier versions of the poem, Los grillos sirven el café, and a short story, La Llorona alburquerqueña, were published in More Voices of New Mexico by the New Mexico Book Co-op.
(FRAGMENTO DE)

IN THE SHADOW OF THE SANDÍA MOUNTAIN

Little adobe houses painted brown,
Under the steeples of San Felipe church.
All of your ditches were dug,
And the Spanish has been forgotten.
But the Alburquerqueño returns to you,
To the Duke City that never lets go.
Alburquerque, my hometown,
In the shadow of the Sandía Mountains.
Octavio Paz wrote that poetry is “the nouns, bony and full of roots, planted on the waves of language.” My poetry has two languages. Growing up in Albuquerque, my father was also my first Spanish teacher; my mother my first English teacher. Their decision to teach my siblings and me to read, write, and speak both languages became the core of our identity when bilingualism maybe wasn’t valued as much as it is now. My grandparents, great-grandparents, and others were punished in New Mexico schools for speaking Spanish. So, I dedicated my book to my New Mexican grandparents to validate our language, experiences, and identity. Every poem has a back story and someday I’ll write a study guide about each one.

The verses echo the Spanish spoken in New Mexico and southern Colorado, a subdialect of Mexican Spanish, for centuries. I didn’t realize how Mexican the language of this region was until I lived and studied in Spain. Word choice was important to me and my editors. For example, some translate “New Mexican” as nuevomexicano, but I discovered the correct term is neomexicano. Thus, the book title in English would be New Mexican Echoes: Poetry from the Land of Enchantment.
GUADALUPE HIDALGO

E      N      G      L      I      S      H
Language dilemmas reflect a bilingual, bicultural identity rooted in conflict and duality that many of us experience. The book’s duality begins in its physical structure. Half the poems are Spanish originals and half are English originals. The book’s left pages have the poem’s original language while the other version mirrors them on the right. Bridging the two halves is Guadalupe Hidalgo, a calligram that paints an hourglass as Español dissolves into English. It’s a different way of telling the tragic story of language loss in New Mexico, Colorado, and the southwest after the Treaty of Guadalupe Hidalgo, as well as the identity crisis of ni de aquí, ni de allá so many of us endure.


My poetry has two languages. Growing up in Albuquerque, my father was also my first Spanish teacher; my mother my first English teacher.

The book’s 2019 release, during my last semester of library school at St. John’s University in New York City, delayed promotion until that summer, except for one special library. Nestled on banks of the Hudson River in Battery Park City, Poets House is a national literary center and poetry library with more than 70,000 volumes in its collection. Each summer, they host a showcase of recently published poetry books. One spring day after class, I rode the (E) train to the city to contribute my book in memory of my nephew. Poets House was the first library to catalog my book and give it a home on their shelves, followed by the Zuhl and Branson libraries at New Mexico State University where I studied Spanish literature. 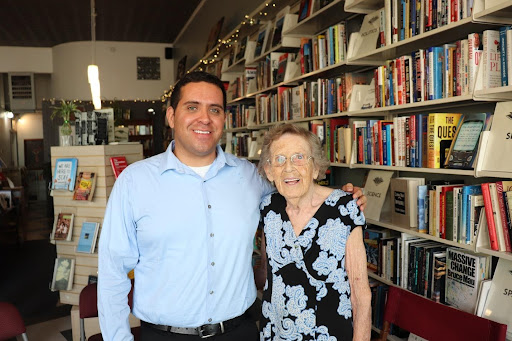 I reunited with my second grade teacher, Mrs. Peterson, at a poetry reading in Albuquerque’s Nob Hill. Photo by Sean O’Dea. Used with permission.

Since Judith Literary Press is a small, independent publisher, I organized the social media campaigns, scheduled radio interviews, arranged book signings, did newspaper interviews, and distribution to local bookshops. Networking helped me arrange my first reading and book signing at Las Pistoleras Instituto Cultural de Arte in Taos; a radio interview on Espejos de Aztlán, a bilingual arts and public affairs radio program on Albuquerque NPR affiliate KUNM 89.9 FM; and book signings at independent bookshops. My second grade teacher, Barbara J. Peterson, heard my radio interview and attended my last book signing. After many years of not seeing each other, it was wonderful to be reunited through poetry. “I have more than 4,000 books and I swore I wouldn’t get any more,” she told me with a wink. “But I’ll make an exception for you.”

The book and related content were entered into contests. In November 2019, the book won first place in the Spanish language category in the New Mexico-Arizona Book Awards and several awards in the 2020 New Mexico Press Women Communications Contest, including first place in the Graphics and Design category; first place in the Web and Social Media category for personal website design; and honorable mention for the August 2019 radio interview. 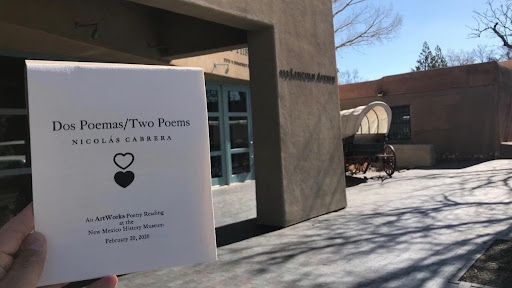 On February 20, 2020, I was invited to read and share my work with nearly 200 students in Santa Fe through ArtWorks, an experiential arts program for Santa Fe Public School children and their teachers. Students listened eagerly, asked profound questions in both languages, and went on to write their own bilingual poetry in class. Everyone also received a special edition chapbook of my poetry, Dos poemas/Two Poems, printed on a historic printing press in the Palace of the Governors. So far, sharing poetry with so many young, creative minds has been my most rewarding book experience.

Geese fly above honking,
Dawn’s crisp breeze whispers in my ear,
I pass sleeping trees into fading distance,
The acequia’s water serenades me.

Under foot the crunch of leaves,
Dogs faintly bark as the heavens ignite,
Fuego roars from a balloon across the reef,
It splashes down, then ascends.

The teakettle whistles as I make coffee,
And the pages of my libro rustle,
The doorbell rings interrupting my solitude,
Children want candy from my bowl.

In March 2020, just as the pandemic transformed the world, I moved to Denver to begin working as a librarian in the Denver Public Library. That summer, DPL partnered with local businesses on a Poetry Walk. Businesses around the city hung dozens of posters with poems in their windows and on their walls. This creative outreach idea brought the library to different neighborhoods at a time when the library’s doors were still closed to the public. I offered Autumn’s Refrain/The Heavens Ignite which captures the unique Albuquerque autumn of hot air balloons and bosque of the Río Grande. Much to my amazement, I found a poster with the poem still hanging outside a coffee shop in Cherry Creek North in September 2021! My grandparents enjoying one of my Christmas poems at last year’s Art at the Abbey.
Finally, a special place I have shared my poetry for three years now is a unique showcase, Art at the Abbey. Last year, La yerbabuena was on display at the library of Santa María de la Vid Abbey in Albuquerque from October 14 to November 5, 2021.

May they never finish,
The poems that you scrawl across heaven.
May your vision soar,
May you fill many books.

May the ink of your words,
Never run dry,
And the love in your soul,
Never leave you.

The last verse of Ecos Neomexicanos ends, rather appropriately, with an em dash. My editor suggested this because some day, perhaps soon, there will be another collection of  poetry that echoes through cafés, bookshops, libraries, and beyond.
Post a Comment