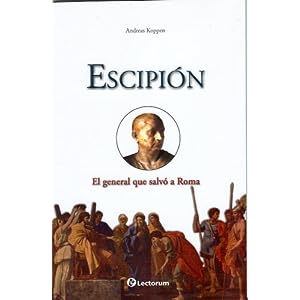 The series Guerreros y Estrategas/Warriors and Strategists features men who fought for an ideal or for their country, who built empires or defended borders.  This collection of short biographies documents the exploits of Alexander the Great, Hannibal, Napoleon, San Martin, Morelos, Admiral Nelson and President Eisenhower among others, in this case - Scipio.

Military innovator.  Diplomatic leader. Skilled orator. These are among the many ways to describe Publio Cornelio Escipion (236-183 BC), credited with leading the Romans to glory in their fight against the Carthaginians during the Punic Wars. With descriptive tales of battle and an effective use of passages from Greek and Roman historians of the time, Koppel’s telling conveys the greatness of Escipión, later known as Escipion “el Africano” (Eng., Scipio Africanus) due to his victory against Hannibal on that continent.

Explanations of military formations and what transpired in myriad locations would have benefitted from diagrams, and more importantly, maps. Instead, the book includes illustrations of sculptures, paintings and artifacts, which are at times too dark. An overabundance of facts and figures also bogs down the text occasionally, distracting from the action.

Nevertheless, for readers who enjoy history or biographies, Escipion is a worthwhile introduction to this important historical figure. This paperback series may not stand up to heavy use.