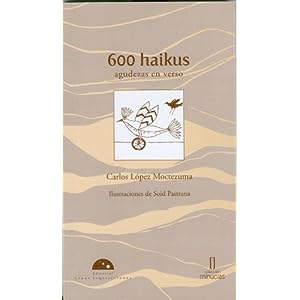 This is an anthology of haiku written by Mexican author López Moctezuma. Haiku is a poetic form that was born centuries ago in Japan. They are composed of three lines of 5, 7, 5 syllables respectively. Haiku capture the moment with words and because those moments are very short, so are the poems. José Juan Tablada (1871-1945) was the first Mexican poet to write haiku.

Even those unfamiliar with haiku will be delighted with this anthology full as it is of Mexican mischief and humor.  López Moctezuma finds inspiration for his 600 haiku in topics as diverse and deep as love, suicide or injustice. The tiny poems are accompanied by tiny illustrations by Soid Pastrana.  Haiku like this one - “Si las paredes / fueran sordas los chismes / disminuirían” = ”If the walls / were deaf gossip / would diminish” - have an outsized impact.  Politics are not left out: “Un político / con moral es un pobre / político” = “A politician / with morals is a poor / politician” or “El político / y el león piensan que todos / son de su condición” = “The politician / and the lion think that everyone / is of their condition”.
Recommended for public libraries
Post a Comment