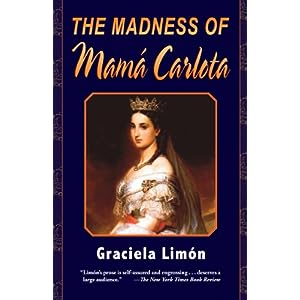 In her new novel, award-winning author Graciela Limón takes on 'Mamá Carlota', Empress during the French Imperial period in Mexico (1864-1867).  The story is interlaced with snippets of battles and occasional references to historical figures from the Mexican war of liberation from France.  This novel falls short of Limón's usually outstanding storytelling.  It is difficult to understand the ‘Mamá Carlota’ appellation in this novel, aside from the fact that in her naiveté Carlota saw herself as a mother to the Mexicans despite her insensitive disregard for their dismal living conditions.

An interesting subplot features three indigenous sisters who mysteriously appear at the hacienda of the wealthy Acuña family.  After the youngest sone rapes one of them, the three sisters murder him and then escape to the city to become Carlota’s personal maids.  Relegated to the sidelines, the sisters offer a more interesting story and characterization than the Empress.
This very light read is recommended for public libraries
Post a Comment