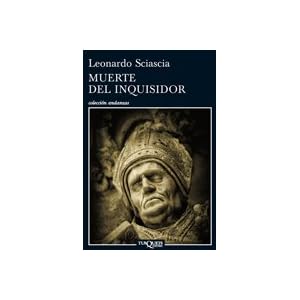 This book presents a grim picture of the Inquisition in Racalmuto, Sicily during the 17th century. During that awful time, Friar Diego La Matina was judged as a heretic and sentenced to death by burning at the stake.

An Italian writer deeply involved in the social and political life of his time, the author of this book and one of the 20th century's most important European writers, Leonardo Sciascia (1921-1989), could not find any evidence that explained the exact nature of La Matina’s crime.  This weakly documented case from the 17th century allows Sciascia to portray that act of human unfairness as evidence for his belief that the powerful continue to silence those who call for justice.

For those interested in the Spanish Inquisition, “La muerte del inquisidor” is an easy to read and very well researched short essay, full of fascinating details about the Inquisition in Sicily.