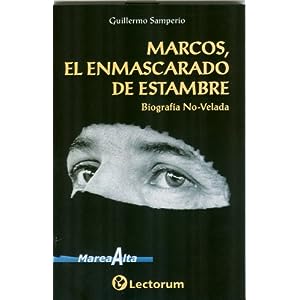 In this novella by celebrated contemporary Mexican author Guillermo Samperio, the reader is presented with a portrait of Subcomandante Marcos, the leader of the Zapatista National Liberation Army (EZLN) rebel movement. Samperio’s experimental writing style lends itself well to this profile of the mysterious and perhaps romanticized guerilla leader.

The engaging and often humorous text interlaces historical snippets and anecdotes about Marcos with imagined cinematic scenes described by the narrator, a film student who is attempting to secure an interview with the Zapatista leader.  Towards the end of book, a discussion of Marcos’s protest of the treatment of indigenous peoples in Mexico also becomes a vehicle for criticism of the current Mexican administration.
Recommended for academic libraries supporting Latin American studies programs, as well as public libraries, particularly those serving Mexican immigrant and Mexican-American communities
Post a Comment