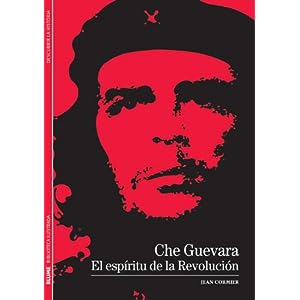 A resource on the life of Ernesto Guevara de la Serna, this illustrated biography highlights the tumultuous rise of Che’s leadership in the Cuban revolution and aftermath; providing insightful narration from Ernestito’s birth in Argentina, purported suicide, to Africa, Asia,  Europe and his subsequent capture and death by a reluctant executioner in Bolivia.  French author and journalist, Jean Cormier unveils the life of the trained physician turned commando, painting a vivid picture of a philosophical/cerebral, tactician and economist; a hero and martyred revolutionary.  Cormier covers in detail the early formulation of Che’s politic through his experience with the leprous and exploited indigenous populations and the cementing and proliferation of his socialistic ideology.

This work, originally printed in French and translated into the Spanish reads quickly—almost like a graphic novel; an excellent and timely publication with the handing over of power in Cuba. Be Che a villainous ghost or heroic spirit, this thought provoking biography is succinct, well researched and highly informative.

The table of contents contains a helpful summary of chapters.  An appendix of testimonials and documents further chronicles Guevara’s life and posthumous influence.

One of Blume’s Biblioteca Ilustrada series, this 5x5½ paperback was constructed for heavy circulation.  The book with its fiery red cover emblazoned with the bereted Che’s image could serve as the centerpiece of a bookstore endcap.  Somewhat written in a scholarly tone, this biography’s appearance and layout should appeal to the interested student or adult reader. A Latin-American history aficionado or scholar may not agree with the totality of the author’s depiction of el Che; however, they will appreciate it.

Originally printed in French and translated into the Spanish, this monograph can easily supplement, augment or even serve as an introductory item to an academic or public library's collection. RECOMMENDED.
Post a Comment