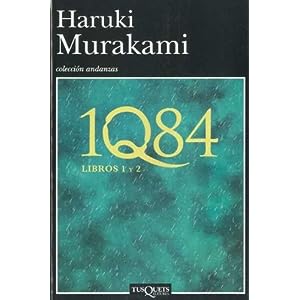 Reviewed on September 15, 2011 in Kirkus Reviews accessed June 8, 2012 at http://www.kirkusreviews.com/book-reviews/haruki-murakami/1q84/#review

“Things are not what they seem.” If Murakami’s (After Dark, 2008, etc.) ambitious, sprawling and thoroughly stunning new novel had a tagline, that would be it.

Things are not what they seem, indeed. A cab driver tells a protagonist named Aomame—her name means “green beans”—as much, instructing her on doing something that she has never done before and would perhaps never dream of doing, even if she had known the particulars of how to do it: namely, to descend from an endless traffic jam on an elevated expressway by means of a partially hidden service staircase. Aomame is game: She’s tough, with strong legs, and she doesn’t mind if the assembled motorists of Tokyo catch a glimpse of what’s under her skirt as she drops into the rabbit hole. Meanwhile, there’s the case of Tengo, a math teacher who, like Aomame, is 30 years old in 1984; dulled even as Japan thrives in its go-go years, he would seem to have almost no ambition, glad to serve as the ghostwriter for a teenage girl’s torrid novel that will soon become a bestseller—and just as soon disappear. The alternate-universe Tokyo in which Aomame reappears (her first tipoff that it’s not the “real” Tokyo the fact that the cops are carrying different guns and wearing slightly different uniforms), which she comes to call 1Q84, the q for question mark, proves fertile ground for all manner of crimes, major and minor, in which she involves herself. Can she ever click her heels and get back home? Perhaps not, for, as she grimly concludes at one point in her quest, “The door to this world only opened in one direction.” It’s only a matter of time before Aomame’s story becomes entangled in Tengo’s—in this strange universe, everyone sleeps with everyone—and she becomes the object of his own hero quest; as he says, “Before the world’s rules loosen up too much…and all logic is lost, I have to find Aomame.” Will he? Stay tuned.

The Spanish edition of this novel is published in three paperback volumes.
Highly recommended for bookstores and large public libraries
Post a Comment