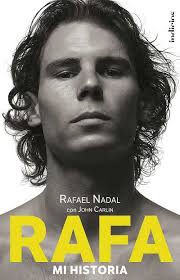 It is impossible not to be impressed by the accomplishments of twenty-five year old Spanish tennis phenomenon Rafael Nadal. He is the only tennis player to have won all four Grand Slam events in the same year and the youngest of the seven players who have won all four titles to date. Nadal’s autobiography, written in conjunction with award-winning journalist John Carlin impresses the reader with Nadal’s ability to simultaneously be an intimidating and aggressive player and a humble, polite person on and off the court.

At its best, this book captures the reader’s attention with suspenseful point-by-point narration of significant tournaments, such as Nadal’s 2008 victory over Roger Federer at Wimbledon, and glimpses into Nadal’s psychology. The book’s weakness is an excessive attention to details about Nadal’s childhood and personal habits. The structure of the book, alternating between a first-person account by Nadal and the outsider’s viewpoint by Carlin, adds interest.
Tennis enthusiasts and those who enjoy reading about sports and sports personalities will relish this book. Recommended for public libraries.
Post a Comment