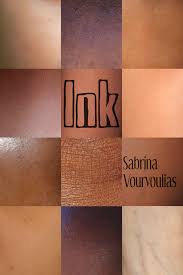 A chilling tale of American apartheid, and the power of love, myth and community. In the near future, color-coded tattoos and surgically implanted tracking devices are mandated for ethnic undesirables and their sympathizers. As in other dystopian novels, the characters in Ink struggle to retain their humanity amid officially sanctioned brutality.

The story is told in four alternating voices—two “inks” and two whites. The characters fall in love and try to make a life in the underground. Mystical elements in the plotline give shape to the fierce hunger for spirituality and social justice that sometimes can move mountains--or topple governments. Some plot threads are left tantalizingly undeveloped. There is just enough unsaid to want more.

The distinctive cover art is a montage of skin tones, representing the stigma and the civil disobedience of inks.

Author Sabrina Vourvoulias, is a multi-talented editor and blogista. Ink is her first novel.
. Recommended for public and academic library fiction collections
Post a Comment