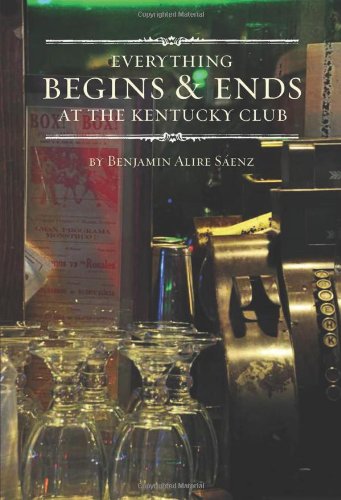 Anyone who lives in or frequents the El Paso area has heard of the Kentucky Club, the legendary bar in neighboring Juarez once visited in its heyday by movie stars such as Elizabeth Taylor, Steve McQueen and John Wayne.  The club, still in existence, plays a role in each of the 7 stories published in this wonderful new collection by that prolific chronicler of the West Texas border region, Benjamin Sáenz.  Each story is a masterpiece of modern romantic angst, bad decision-making and genuine heartache.  While almost impossible to pick a favorite, there are a couple of standouts.  Sometimes the Rain introduces us to Ernie Zaragoza, a high school student who rescues a closeted gay classmate from his abusive dad and in the process, discovers a secret about himself.  In He Has Gone to Be With the Women, El Pasoan Carlos falls in love with the elusive and enigmatic Javier who resides across a border which ultimately consumes them both.  Whichever story the reader chooses, he is guaranteed a beautifully written paean to the power of an empty bar stool, a stiff drink, a receptive ear and, occasionally, redemption.
Highly recommended for all libraries collecting quality literary fiction
Post a Comment