Yago Cura is the Publisher and Editor of Hinchas de Poesia he also serves as the REFORMA adult book reviews editor and many other roles as well. Connect! 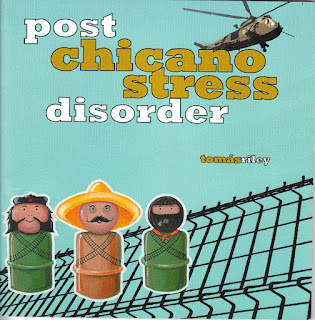 At the height of Reagonomics, Chuck D said, "Rap is C.N.N. for black people," and that operating principle could easily be what drives a poet like Riley to write Post Chicano Stress Disorder. His is a book of poems in which impetus comes not from other forms of poetry per se, but from canonical Hip Hop anthems, like Wu-Tang's "C.R.E.A.M.", and the swag of the blues, "an eloquence/ unflattering as game; the hold the/ note twelve bars and cry a/ little at the end" (p. 39). In this sense, it’s just another mash-up, just another amalgam, hybrid, simply another component in a system; Riley intersperses that hybrid imperative with snippets of displaced narratives, and tectonic descriptions of San Francisco's Mission.

It's also a book of poems in which an experimental litany ("litanias") is also a "record that skips on all four sides." (Imagine what Terminator X could have done with Riley's four-sided record?) Maybe, it's simply a shiteater's pean to the reflective largesse of reconstructed meaning vis-a-vis wordplay; for example, what exactly does Riley mean with the phrase, Post Chicano? Is the contemporary Chicano somehow different than the Chicano that came before him, or is he saying that altogether, Latinos have moved past regional categorization? As Latinos, have we moved past our own selves? Have we enclaved ourselves out of a relevance of existence?

"Conjure," the first poem, reads like an abracadabra for a minority caucus, "say your name right/ be it bold/ or stand up treacherous/ bind myth back to the bone/ take shape again" (p. 1). The invocation in "Conjure" is not only interested in producing magic, there's a playfulness that's evocative and discursive and ultimately sonorous, "drive cedar through the crevice of your accent" (p. 1). At the same time, "Conjure" seeks to salve the wounds the Beauvoirian other might feel, "find protection in the meeting place of moments/ meant to curl the skin right off you" (p. 6).

But, Riley ensures that the ethnic navigation system is not on the blind tourist circuit; in "hip: a sickle moon injunction" Riley has a frank dialogue with Obama in no specific terms, and takes aim at the marketing promises ("Hope" and "Change") made during his candidacy and re-election, "deplorable non-cause/ a mantra so perverse/ produces/podium acceptance speeches"(p. 17). There is plenty of reflexive poetic exposition asking the inconvenient questions and seeking the ugly answers, 'my god," they say, trying to nod/ we wanted/ change"(p. 19).

Moreover, Riley queries the negative forces at work within his community ("breakdown of a / brown on brown remix") (p. 40), as well as the negative forces (gentrification, scapegoatism) that impose themselves and originate outside his community. Possibly what Riley is trying to achieve is to inspire the "best of us" to never "stop/ singing" (p. 40), while at the same time being cognizant of the damage that unchecked ambition (hardheartedness?) can wreak on burgeoning minorities, "whatever violence/ efficiently/ installed us at the verge"(p. 32).

To have grown up during the Cold War, to be a veteran of the Cold War, implies a certain way of looking at minorities, poverty, and U.S. militarization. During the Cold War, the country spent billions on Defense, but the inner cities fell apart as crack cocaine ravaged families and rent communities. During the late 90's those same neighborhoods were gentrified, pushing out long-standing residents for affluent young professionals, "(for Walgreen's and a few condos with insolent/ price tags)". Riley's Post Chicano Stress Disorder deftly captures the landscape of a community in flux and lays bare a foray, a response, and possibly a template for addressing the gentrification and disorientation that has polarized many communities.

This title is perfect for academic libraries wanting to accession collections of contemporary Latino poetry, or are seeking to augment their collections with Latino and African-American poets will definitely find this title of interest. Academic libraries that support programs relating to urban studies, ethnic literature, comparative literature, or even Chicano studies might also find this title of great interest, especially when paired with books by Mike Davis like "Magical Urbanism: Latinos Reinvent the U.S. Big City," Juan Gonzalez’s "Harvest of Empire", or "Eminent Domain" by Justin Petropoulos.