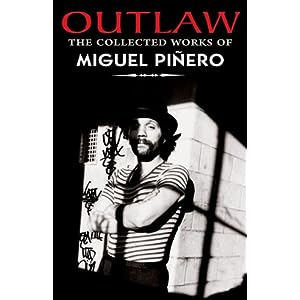 Outlaw: The Collected Works of Miguel Piñero is Arte Público Press’s long-awaited publication of poetry and plays by Piñero.  Miguel Piñero (1946-1988) was a Nuyorican poet, playwright, actor and television screenwriter, who described himself as “a thief, a junkie I’ve been/committed every known sin”.  As a co-founder of the Nuyorican Poet’s Cafe, he provided an unfiltered depiction of barrio life in New York’s Lower East Side, incarceration in juvenile and adult institutions, and varied criminal activities.   Outlaw is a comprehensive collection of Piñero’s work.  The volume is composed of two sections: poetry and plays.  The poetry section contains the eighteen previously published and twelve previously unpublished poems in “La Bodega Sold Dreams”, along with eight other previously unpublished poems.  The play section contains ten full-length plays, including “Short Eyes”, which won the 1973-4 New York Drama Critics’ Circle Award for Best American Play and was later made into a film.  Because Piñero’s work is peppered with the vernacular of his time and world, a Glossary of Slang is included.  Supplementing these sections are Nicolas Kanellos’s introduction to the poetry and Jorge Iglesias’s introduction to the drama, providing helpful commentary of Piñero’s work and its cultural importance.

As an invaluable presentation of Miguel Pinero's work, Outlaw is HIGHLY RECOMMENDED