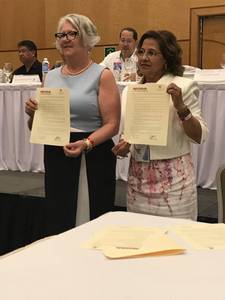 Renewing the agreement between AMBAC and REFORMA
June 2018 / ALA Edition

Serving REFORMA has been the highlight of my career. As many of you know, I came to librarianship as a second career after teaching English to Speakers of Other Language for more than 25 years. I started my job at New York City College of Technology, the City University of New York in June 2000. The following September, a colleague invited me to a REFORMA Northeast Chapter Meeting at the Brooklyn Public Library. Isabel Espinal was presiding as President and others sitting around the table included Roxana Benavidez, Haydee Hodis, Toni Bissessar, Judy Rivas, Mario Gonzalez, Janice Greenberg, Linda Goodman, Miguel Garcia Colon and a few other strong REFORMISTAS. Martin Gómez, then Executive Director at Brooklyn Public Library, greeted us and talked highly of REFORMA and its history. Needless to say, I was totally captivated. Thus, my days with REFORMA began. I must say that I learned from the best and the rest is history.

My year as President has taken me in many different directions. Having worked hard during my Vice-Presidency preparing an outstanding REFORMA National Conference and then having it canceled due to Hurricane Irma in Puerto Rico was an emotional setback. However, getting the opportunity to visit Puerto Rico in January 2018 and meet with the most compassionate, resilient, dedicated, caring and brave librarians was very motivating. They had experienced a terrible trauma during Hurricane Maria, and yet, they were at the front lines trying to help students and patrons in makeshift rooms while seeking scarce funds to reopen their libraries. Another grand moment was announcing the Pura Belpre Awards during the Youth Media Awards at ALA Mid-Winter. The excitement in the auditorium and representing REFORMA honoring Latino authors was, by far, just outstanding. Thank you to the 2017-2018 Pura Belpre Committee for your dedication and for picking the 2018 medal winners for narration Lucky Broken Girl, by Ruth Behar and for illustration La Princesa and the Pea, illustrated by Juana Martinez-Neal, written by Susan Middleton Elya.

One of my final activities was being invited to the Mexican Library Association (AMBAC) Annual Meeting in Ixtapa, Mexico. I gave a presentation about REFORMA and the work that we do. Many REFORMA Chapters sent me photos and I shared them with attendees. Then, the incoming President of AMBAC, Professor Marisela Castro and I renewed the agreement between AMBAC and REFORMA. Originally signed by Loida Garcia-Febo during her REFORMA Presidency in 2010, the agreement promotes the exchange of professional information, the presentation of joint programs and workshops and the promotion of sister library programs.

I am grateful to my Executive Committee – Madeline, Kenny, Gloria, Nicanor, David, Elizabeth and Patty. You were a strong team. You all took ownership during our financial debacle and you were the support I needed to help lead REFORMA and prepare the way for the future.

REFORMA has a rich history. In 2021 we will be celebrating our 50th Anniversary. For five decades REFORMA members have been advocating for Latinos and many others in our communities. I see this as the opportunity to launch a campaign and tell our story. There is so much to tell.

Our story is so we can feel proud. It is also essential to share our story and to let new professionals hear and learn about our history. We welcome new members and especially all new professionals to join REFORMA. You are our future.

Thank you REFORMA. Thank you for your friendship, and for your love. May the coming years be as fruitful.
Post a Comment