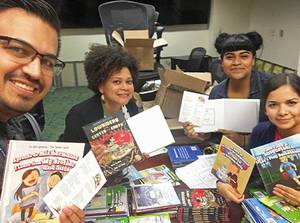 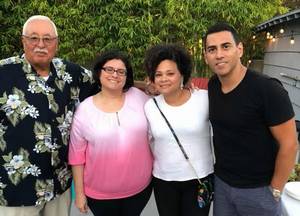 Colleagues and Reformistas at the JCLC Reception during ALA Annual 2018.
Fall 2018

It is my honor and my pleasure to serve as your president in a time when there is so much hope and excitement about REFORMA’s future. I'm very fortunate to work alongside outstanding REFORMA members who are serving in the Executive Committee and the Board of Directors and who volunteer with committees, task forces, and local chapters. I’m inspired by their professionalism and their efforts to fulfill REFORMA’s mission.

When I ran for this position, I promised to focus on increasing communications through a newsletter, improved listserv and enhanced website. I also pledged to find ways to increase membership, generate more income, revive enthusiasm in committee work, and communicate to the world the value of REFORMA. That’s why I have chosen The Power of Communication as the theme of my presidency.

Since July, I have been working with the Executive Committee to take the first steps toward achieving this year’s goals.

Here are a few of the projects we have been working on:

We have been planning for the 3rd National Joint Conference of Librarians of Color, Gathering all Peoples: Embracing Culture & Community taking place Sept. 25-30 in Albuquerque, New Mexico. The Ethnic Affiliates Gathering will take place on Thursday, September 27 in Ballroom B & C, starting at 6 p.m. This reception is free for REFORMA members and will feature a performance by the National Institute of Flamenco, and a special Noche de Cuentos by local storyteller Rosalia de Aragon and guitarist Estevan Pacheco. We applaud Susan Luevano, Roxana Benavides and the team of REFORMA volunteers for their tireless work planning JCLC.

We released a Statement on the Separation of Refugees, Asylum Seekers, and Immigrants at the U.S. Border Searching for the American Dream and appointed a task force, in partnership with the California Library Association, that will create a toolkit on library services to immigrants and refugees. REFORMA’s Legislative Committee spearheaded ALA’s Resolution to Reunite Detained Migrant Children with their Parents.

We appointed/confirmed chairs and members for the following committees: Public Relations, CAYASC, Membership, Fundraising, Finance, International Relations, Mentoring, Legislative, Nominations, Organizational Development & New Chapters, Program, Technology, and Translations. The rest of the committees will be officially appointed/confirmed by the end of the month— including a committee tasked with planning RNC7 and the 50th Anniversary in 2021.

We are in the early stages of planning the REFORMA Institute, a professional development opportunity that we would like to offer right before ALA Annual in Washington, D.C. Stay tuned!

We started planning for ALA Midwinter. Registration is now open. The REFORMA hotel is the Crown Plaza.

REFORMA will be present at the Guadalajara International Book Fair in November. We will attend the Meeting of the Asociación Mexicana de Bibliotecarios, AMBAC.

This year I plan to attend as many local chapter meetings as possible. I recently attended a meeting of the Oregon Chapter, virtually, and learned so much about the wonderful work they do for their communities. I look forward to receiving invitations to attend chapter meetings and events.

I want to thank the Reformistas who have shared their precious time to mentor me; I've had many inspiring conversations that have made me even prouder of REFORMA’s relevance and legacy. I want to thank my Los Angeles Chapter for their encouragement (I love the survival kit and enjoyed the fun party at Mario Ascencio’s home). I also thank the Los Angeles Public Library’s administration and staff for their strong support of REFORMA.

I look forward to working with all of you this year. If you have ideas/suggestions that can help us further REFORMA’s mission, contact me at president@reforma.org. Adelante REFORMA!

P.S. In case you missed it, I was interviewed by Infobibliotecas magazine for an issue focused on American libraries that also features an interview with Loida Garcia-Febo. You can read the interview en español here.