I would also like to extend my deepest gratitude to those who have left the executive board: Secretary Ms. Ana Campos, who did a fabulous job (we will miss you Ana!); to our Immediate Past President, one of my good friends, Ms. Madeline Peña. Madeline, REFORMA is heading in a positive direction and your vision and leadership helped shape the path we are on now. Thank you for all your hard work and dedication. Finally, another good friend and my mentor for the past year, President Kenny Garcia. Kenny, your calm, collective, and smooth style of leadership kept REFORMA paddling when the waves really began to hit. Your leadership has led us during one of the most difficult times the world has witnessed since the flu pandemic. Your leadership helped us to see what was ahead and acknowledge what was before us. Thank you my friend, for I have learned much from you and hope I can continue the great work you began. However, and lucky for me, Kenny still has another year, so let’s cause some trouble, Mr. Immediate Past President. 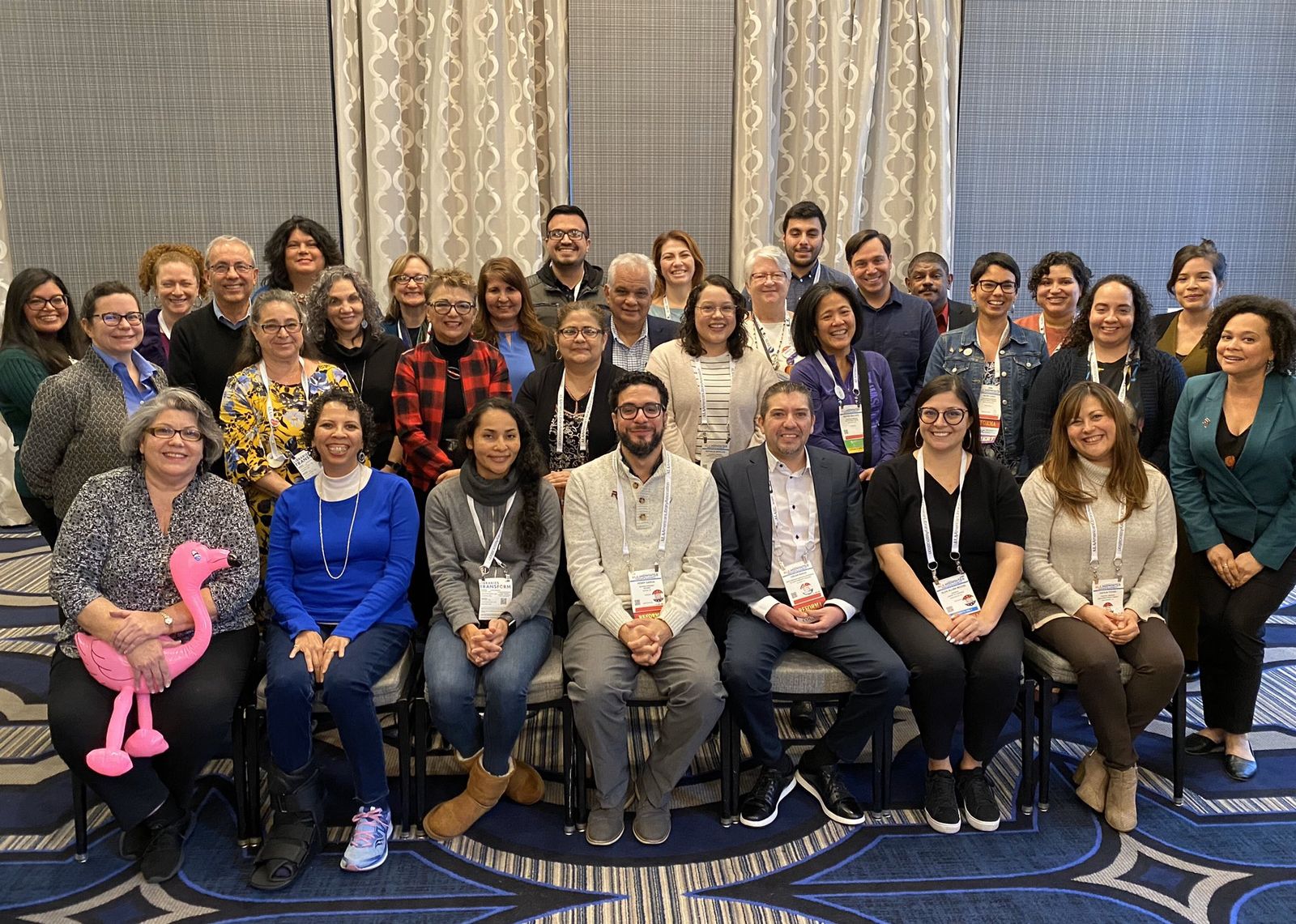 50 years later, it seems we are still on the battlefront. Things have been greatly improved and REFORMA has been a major cause of many of those improvements in the library profession. Our book award, the Pura Belpré, is one of the most important and respected youth and children’s book awards in the United States of America. Our Dr. Arnulfo D. Trejo Librarian of the Year Award has been conferred since 1992. The Elizabeth Martinez Lifetime Achievement Award is bestowed on the very best REFORMA has to offer. These efforts, along with our scholarships, grants, national conferences, and advocacy issues, are what make REFORMA one of the most respected organizations in the librarian world, and a true beacon of progress in the profession. In addition, these kinds of efforts are what has made the library profession a standard of progress.

However, our organization does not seem to stop. Not too long ago we began the Noche de Cuentos, which has gathered an amazing following throughout the written world of literature. Our National Children in Crises Project has brought thousands of books to refugee and immigrant children coming to our borders from around the world. In 2011, REFORMA launched a foundation to build an endowment to continue doing the work our founding president envisioned, which was to continue to recruit librarians interested and committed to our cause. REFORMA does not stop and we have no plans of slowing down.

Our 50th anniversary National Conference is happening and due to unforeseen circumstances, we have had to adjust it a little, but we are moving forward. I guarantee this is going to be the greatest party anyone has ever seen. Portland, get ready, we are coming! There has also been discussion within REFORMA about launching an adult book award. That, my friend, is in the works. Our financial budget is strong, our membership is solid, and, most important, the love and respect we have for each other is deep. Unity, commitment, and always positively moving forward will define the next fifty years of our organization, and I have the great honor of working with an executive team that will close this era and begin setting the road for the new age.

Unity, commitment, and always positively moving forward will define the next fifty years of our organization, and I have the great honor of working with an executive team that will close this era and begin setting the road for the new age.

This past year we have been witness to one of the scariest viruses that the world has seen in a long time. COVID-19 has ripped through communities and torn families apart. Many have seen their colleagues become ill, and, more sadly, some of us have lost good friends and loved ones. Times are hard, people are losing jobs, and full-time work has become part-time work. We have seen retirement savings go straight out the door. Nevertheless, we will continue forward, no matter what lies ahead. Rest assured that REFORMA, your organization, will be there for you and that, together, we can withstand this pandemic.

Last month we also saw people come together, young, old, those of different backgrounds, race, sexual orientation, religion, and so forth, to protest the racist, unjust brutality that caused Mr. George Floyd’s death. Once again, racism and hate are at the forefront of the conversations we are having at our dinner tables. Yet we acknowledge that the conversation of racism did not begin a month ago. Many of those who have come before us have been fighting such injustices since the Trail of Tears, since the days of slavery, since the time the Texas Rangers were hanging Mexicans all across the Rio Grande. Sixty years ago, the great Martin Luther King Jr. stood in Washington D.C. and spoke about the same kind of conversations we are having today. A dark, malicious cloud of hate seems to lay across this country. What was once laughter and a common smirk of goodness toward our fellow neighbor has turned to fear. Cold interactions between strangers have become the new norm. Moreover, it seems that if you are black or brown, someone is either calling the police on you or yelling for you to go back somewhere...

Nevertheless, I am proud that REFORMA took quick action in condemning all hate and racism. We joined and stood in solidarity with the Black Caucus of the American Library Association, the Asian/Pacific American Library Association, and other ALA ethnic affiliations and sent a clear message that hate and racism have no place in our profession and that we plan to continue the conversation. However, much more is needed than just talk. We must never forget the past, for if we do, then it dooms the future we are trying to pave. As part of my presidency and with the permission of the executive team, I hope to bring forth ideas to combat racism such as providing workshops, trainings, and other incentives on how to best defeat this hate, and also work with ALA and ethnic affiliates on how best to combat such acts. In addition, the ALA Director has invited representatives from the various ethnic affiliations to be part of a conversation within our profession about racism, and I am glad that our very own Mr. Kennedy Garcia will be there leading REFORMA’s efforts. Furthermore, I ask of you to design strategies within your own chapters to help our organization effectively combat racism and hate. Make it a point to offer workshops and trainings about ending racism in your communities. Reach out to REFORMA National and let us hear your ideas on how to best approach and defeat this hate.

The times we are living in today are unparalleled. In addition, it does not help that the White House is a muddled system that seems to act more like a regime than an actual American governmental administration. In the coming months, we will be witness to one of the most important U.S presidential elections of our time. Therefore, what I ask of you today is unprecedented. However, the fear of what might happen if we remain silent, the fear of what might happen if we do not acknowledge the situation in this election is too great and we cannot afford those chances. We cannot sit on the sidelines and we must never be a spectator. As REFORMA President, I ask you, my friends, to rise. The great Emiliano Zapata once said, “I’d rather die on my feet, than to live a lifetime on my knees.”

Join the campaign for a better world. Make the phone calls, do the block walks. Donate your time and, if you can, donate some money. Vote, my friends, make sure your children are voting, make sure your grandparents are voting, and make sure your neighbors are voting. Vote, vote, vote. Get out there Reformistas, the movement to rebuild begins, the time is now or never.