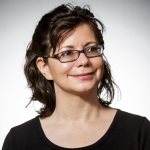 I have been active in REFORMA since my first year of library school in 1992, and I have served as treasurer since 2019. I want to continue my work as REFORMA’s Treasurer because I want to ensure that REFORMA is in a strong position to take on future challenges and help lead and diversify the professions of librarianship and information science.

My goals for the next two years as treasurer include creating a procedures manual and workflow for future treasurers and developing a role for “treasurers emeriti” who can advise new treasurers. This has been inspired by our previous treasurer, Gloria Grover, and the amount of sharing and guiding she has done for me in my first two years of this role.

My additional REFORMA activity includes serving on the Education Committee and being REFORMA’s representative on ALA’s ODLOS Advisory Committee. Prior to that, I served as the President of REFORMA in 2012-13 and co-chaired the Fifth REFORMA National Conference in San Diego in 2015.

I believe my experience and my dedication to REFORMA will allow me to succeed in the role of Treasurer, to serve the association that has given me so much support during my career.