REFORMA is seeking nominations for the 2023 Dr. Arnulfo D. Trejo Librarian of the Year (LOTY) Award. The Award Committee will give the highest priority to early or mid-career candidates who have promoted and advocated services to the Spanish-speaking and Latino communities including the fulfillment of unmet needs during 2022-2023.

The Arnulfo D. Trejo Librarian of the Year (LOTY) Award consists of a $500 stipend.

The deadline for submitting nominations is Friday, April 29, 2023.

FAQ's About the Award

Questions regarding the application process may be addressed to: Karen Centeno-Casillas at awards@reforma.org. 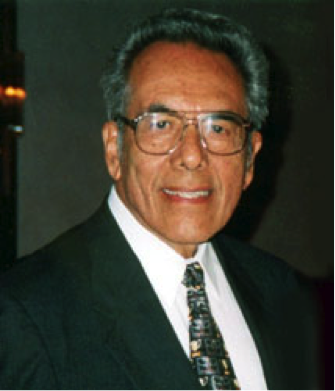 Arnulfo Trejo was an internationally known librarian, educator, and author who helped lead the movement to increase collection of Hispanic literature in American libraries. Through his teaching and leadership positions, Dr. Trejo played an equally significant role in raising awareness of the value of Hispanic librarians, providing substantial growth and learning opportunities to ensure individual and collective successes.

Dr. Trejo was born in Villa Vicente Guerrero, Durango, México. He served in the U.S. Army Infantry in the South Pacific during World War II, receiving a Purple Heart with oak leaf cluster, the Bronze Star Medal, and a Philippine Liberation Ribbon. After returning home to the U.S., he earned a B.A. from the University of Arizona, an M.A. in Spanish language and literature from the University of the Americas, an M.A. in library science from Kent State University, and a doctorate from the National University of México.

Dr. Trejo began his career in academic libraries at the National University of México, followed by UCLA, and California State University in Long Beach. In 1960 he became a professor of Library Science at UCLA and later moved to Tucson to join the faculty ranks at the University of Arizona, where he was a professor of English and library Science until 1984. Highlights of Dr. Trejo’s contributions to Hispanics in the library profession and Spanish-speaking populations include:

• Professor Emeritus at the University of Arizona, establishing and directing the Graduate Library Institute for Spanish Speaking Americans (GLISA) within the School of Information Resources and Library Science.

• Founder and President of Hispanic Books Distributors, ensuring the provision of high-quality Spanish language informational and educational materials to schools and libraries.

• Through the Trejo Foster Foundation for Hispanic library Education and its biannual institutes, his work continued to provide forums that prepare librarians to overcome the challenges they face in their commitment to creating a more diverse profession.

• In his retirement, he devoted time to establishing REFORMA chapters and school clubs to inspire Hispanic youth, planting the seeds for the next generation of library and information science professionals.

“Dr. Trejo was a visionary who dreamed of a better future for our communities. He would be proud of all REFORMISTAS who are carrying on his legacy, understanding our challenges and predicaments, but above all our potential and commitment to change our own destiny with better education and caring for our future generations.” —Ninfa Trejo, August 2008.

2. Does the nominee need to have worked for a certain number of years as a librarian to be eligible?  Is this a "lifetime achievement" award?

The LOTY is not a lifetime achievement award. The focus of the award has changed. The Committee will give highest priority to early or mid-career candidates who have promoted and advocated services to the Spanish-speaking and Latino communities including the fulfillment of unmet needs in the previous two years.

Yes. Nominees and/or awardees must be a member in good standing by the application deadline.

4. How is the nominee rated?

5. What type and level of current year promoting/creating/ advocating library services to the Spanish-speaking and Latino are considered worthy of recognition?

Types and levels of library service include but are not limited to outreach, advocacy, technology-based services, collection development, information literacy, publications, or a REFORMA-related initiative--either at a local, state, national, regional or international level.

6. What comprises a complete nomination packet?

7. Who do I contact if I have questions or need advice?

Questions may be addressed to awards@reforma.org