A Brief History of Dia

In 1996, when REFORMA’s Tucson Chapter heard Pat Mora explore her new idea of initiating an El día de los niños, El día de los libros tradition, the members at the University of Arizona (Tucson), quickly said, “We’ll help.” Members of the El Paso Chapter also added their enthusiasm. The concept was inspired by the Mexican custom of celebrating April 30th as El día del niño, the day of the child, and sought to link children to literacy.
Oralia Garza de Cortes, committed to the concept, offered to present the initiative to the REFORMA Board for its endorsement, and REFORMA became Pat's first organizational partner in 1997. REFORMA has energetically promoted the concept through the years as Día expanded to a year-long literacy commitment with culminating celebrations held in April and expanded to serve all children and families.
REFORMA joined Pat in annually awarding the Estela and Raúl Mora Award. Pat and her siblings established the award in honor of their parents who instilled in them a love of reading, and to recognize exemplary celebrations of Día. Austin Public Library, Texas, won the first Mora Award in 2000.
The winning celebrations are determined and selected by REFORMA’s Mora Award committee, comprised primarily of REFORMA members from across the country who serve on the committee for two years. The chair is appointed by REFORMA’s president. Previous committee chairs include Pamela Martin-Diaz (IN), Ruth Rose Hennessey (OR), Jon Sundell (NC), Elva Garza (TX), and Beatriz Pascual Wallace (WA).  Serving on the Mora Award committee is a great opportunity for youth-serving professionals who are seeking to strengthen their leadership and collaboration skills, and are committed to broadening Día’s national profile. If you are interested in serving on the committee, contact the current chair whose information can be found on REFORMA’s Mora Award webpage.


Since 2016 the Estela and Raúl Mora Award is coordinated by First Book. 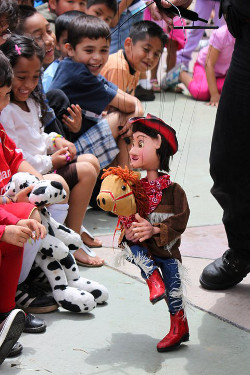 Puppet shows and dramatic presentations are also forms of storytelling. Santa Ana Public Library in California hosted a well-received marionette puppet show at their Día in 2011. Appropriately for an event that celebrates children, dozens of students from neighborhood schools performed music and dance at a branch Día celebration at Pima County Public Library, Arizona, in 2010. 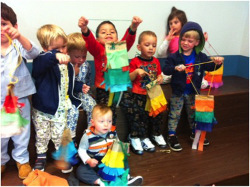 Cultural crafts are often part of Día celebrations. Children proudly display the paper-bag piñatas they created at the District of Columbia Public Library’s Día in 2012.