On behalf of the 2011 (LOTY) Librarian of the Year Committee, Janice and I have the pleasure and honor to announce the 2011 LOTY winner. This year’s award winner is Juan Carlos Rodriguez! The formal awarding was presented at RNCIV in Denver, Colorado on September 17, 2011. 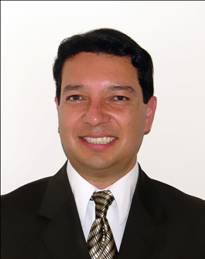 I also want to recognize the hard work done by members of the LOTY Committee this year. They are John Ayala, Susan Luevano, Toni Bissessar, Linda Chavez Doyle, Camila Alire, Janice Greenberg and Ron Rodriguez. I also want to give a big thanks to members of the LOTY Advisory Group: Ben Ocon, Lily Castillo-Speed and Mario Gonzalez. Finally, I want to mention that this award continues on due to the stewardship and guidance provided by Ninfa Trejo.

The Arnulfo D. Trejo Librarian of the Year Award is presented annually by REFORMA to recognize a librarian who has distinguished himself or herself in the field of librarianship, promoted and advocated services to the Spanish-speaking and Latino communities, and made outstanding contributions to REFORMA. The award is funded by the Trejo Foster Foundation for Hispanic Library Education.

Juan Carlos Rodríguez career in academic libraries spans more than 25 years. Currently, he is the Associate Dean of Technology and Information Services at Grand Valley State University where he leads the library technology and systems department, the technical services and e-resources management department and the access services department. Prior to coming to Grand Valley State, he held positions at California State University, Sacramento and the University of California, Riverside. Mr. Rodríguez’s interests include: integrating emerging technologies into libraries; staff/student development and mentoring; and the development of new and innovative learning environments. He is also dedicated to the recruitment and mentoring of minority students into higher education and the library profession and has been involved in minority mentoring programs at the local, regional and national level.

Mr. Rodríguez has been an active member of REFORMA for the past 15 years. He was president of the Orange County Chapter from 1998-99 and was the first Chair of REFORMA’s Information Technology Committee from 1997-2000. As the current chair of the Information Technology Committee, he spearheaded the selection and implementation of REFORMA’s Association Management System that provides a variety of online member services, a website content management system and has improved operational efficiencies and organization collaboration.

Mr. Rodríguez is also an active member of LITA and EDUCAUSE and was a member of the Association of Research Libraries’ inaugural class of the Leadership & Career Development Program (1997-98) and is a 2008 fellow of the Frye Leadership Institute. He holds a M.L.I.S. from UCLA a B.A. from UC Riverside.